Seth Rakoff-Nahoum, M.D., Ph.D., admits that he originally aspired to be a naturalist, studying the flora and fauna of the world around us. But being raised in New York City, he didn’t think in-depth study of the natural world would be possible. 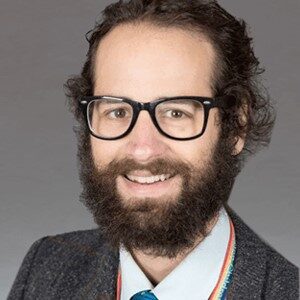 After training in immunology and eventually becoming an assistant professor of pediatrics at Harvard Medical School and an associate physician in pediatrics in the Division of Infectious Diseases at Boston Children’s Hospital, that inclination to study the living world eventually turned inward, focusing on the human microbiome – the vast array of microorganisms that live inside the human body and maintain a symbiotic relationship with our digestive and immune systems. His discoveries are now helping lead the way toward a cure for food allergies.

His work as a principal investigator for the Food Allergy Science Initiative (FASI) studying the human microbiome is offering new insights into how the small molecules in plants affect the human immune response through their interactions with the microorganisms that live in our stomach and intestines.

Rakoff-Nahoum originally came to FASI via his connection with Ruslan Medzhitov, Ph.D., the organization’s chief scientific officer and a professor of immunobiology at Yale School of Medicine.

As he was finishing his Ph.D., the National Institutes of Health released the findings of its decade-long Integrative Human Microbiome Project, which for the first time mapped the human microbiome and confirmed the interactive nature of humans to the microorganisms that lived inside us.

“Basically, we started getting lists of all the microbes that were present on earth in different places, including in us. And this really – I can’t avoid the word – fascinated me,” he said. “When I was a kid, I read a lot of stories about discoverers of all these animals all over the world. And then I was like, ‘Oh, well, maybe I missed the boat on becoming a macroecologist, so I’ll become a microbial ecologist and actually try to learn about all the microbes that are there because it’s a really complex ecosystem.’”

Originally planning to study how the transport of food proteins changes as we develop from infancy, he pivoted to the bread and butter of his lab: how plants are digested by our gut microbiota and how this may impact our health.

His FASI work now addresses two main concepts. First, “what plants are made out of and how those molecules impact us in the intestine,” he said. “And second, based on the principle that our microbiome has really evolved with our diet and us eating plants for thousands of years, that when plants make these small molecules it’s often to impact microbes. Then the question becomes, if you’re eating all these plants, do they impact the microbiome? And does our microbiome impact those molecules?”

Rakoff-Nahoum’s lab has already offered deeper insights into this relationship that will help form the foundation for FASI’s pursuit of a cure for food allergies.

“I think we’re learning that these small plant molecules are very bioactive and they regulate the immune system. We’ve been finding microbes that metabolize some of these really bioactive parts of plants. And we find the bacteria and the enzymes that basically turn off their activity or turn on their activity,” he said. “So, the part I’m most excited about is I really do think these food molecules are fundamental.”

A Better Way to ‘Do’ Science

FASI’s unique model of translational science, which encourages investigators from what otherwise might appear to be disparate fields of study to collaborate and share knowledge, has been integral in Rakoff-Nahoum’s research becoming part of FASI’s ultimate goal to find a cure for food allergies, he said. His research has already contributed to the research of fellow FASI investigator Jing-Ke Weng, Ph.D., who studies the origin and evolution of plant metabolism, as well the role that molecules produced by plants play in helping them survive in challenging environments.

Much of that focus on complementary research is based on the philosphy of FASI co-founder and board executive chair Dr. Chris Olsen, he said.

“Chris has a really good vision of how to do science and how to support science that sometimes is a couple of steps from our goal to prevent and cure food allergies,” he said. “We’re not just a bunch of companies doing R&D to figure out the molecules that might happen to be a drug for food allergies. We’re doing the science necessary to get to that point.”

FASI is the organization leading the way to innovative therapeutic developments that address the root cause of food allergies, and we’re proud to invest in scientists like Dr. Rakoff-Nahoum. The only way we can advance his work, and that of our other investigators and discover potential treatments, is through your continued support.